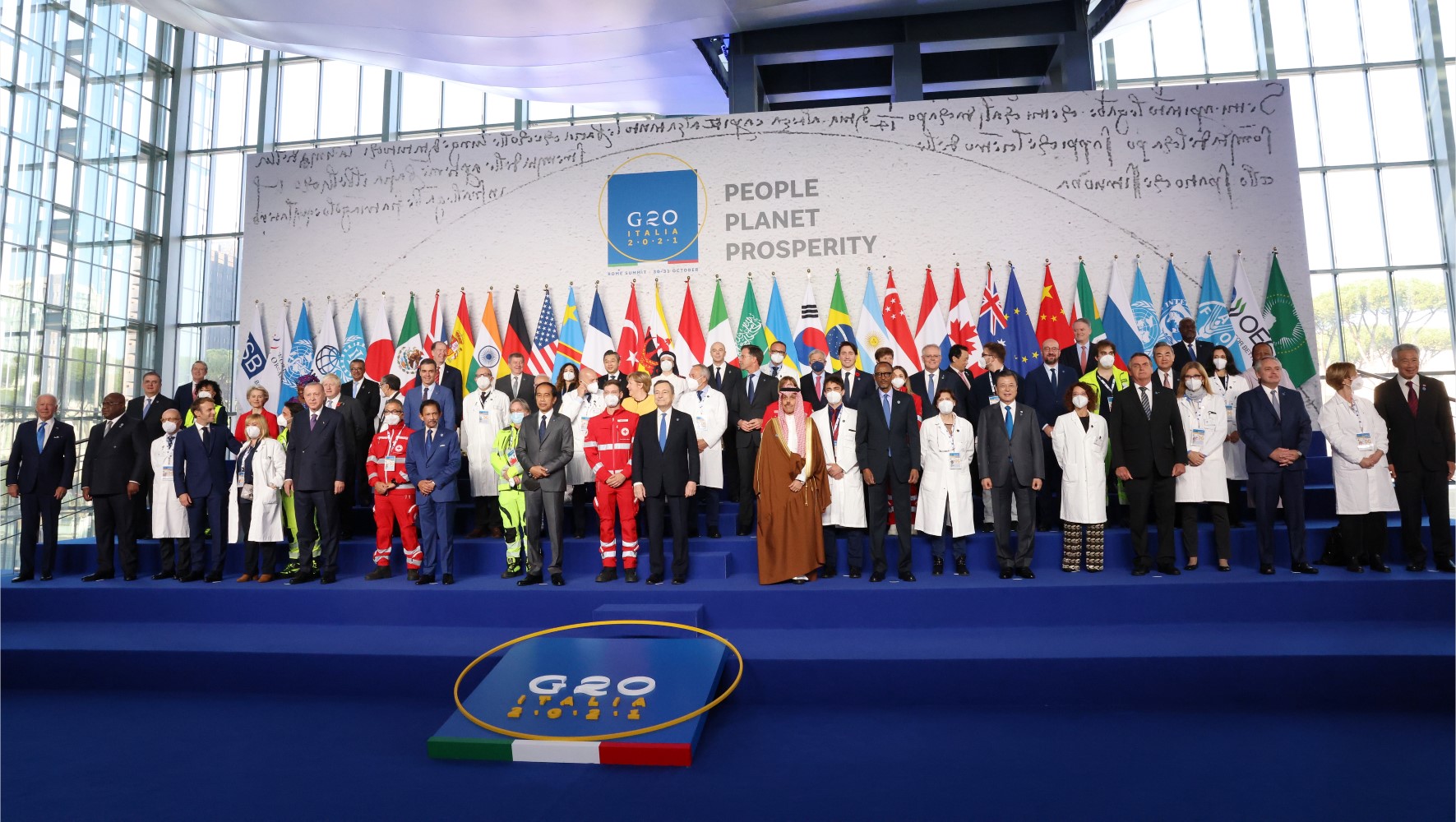 At the end of the meeting, the G20 leaders adopted a G20 leaders’ declaration.

At the summit, the G20 leaders agreed to:

The leaders noted that the global economy has recovered at a solid pace in 2021, thanks the roll-out of vaccines and continued policy support. However, recovery has been highly divergent across and within countries.

This is why the G20 remain determined to use all available tools for as long as required to address the adverse consequences of the pandemic, in particular on those most impacted, such as women, youth, and informal and low-skilled workers, and on inequalities.

We will continue to sustain the recovery, avoiding any premature withdrawal of support measures, while preserving financial stability and long-term fiscal sustainability and safeguarding against downside risks and negative spill-overs. G20 leaders’ declaration

The G20 will also remain vigilant to global economic challenges such as the disruption of supply chains.

To address enduring vaccination gaps, the G20 leaders committed to substantially increasing the provision of and access to vaccines, therapeutics and diagnostics, with particular regard to the needs of low- and middle-income countries.

This should enable progress towards the goal of vaccinating at least 40% of the population in all countries by the end of 2021 and 70% by mid-2022, as recommended by the World Health Organization (WHO).

The G20 leaders also reaffirmed their commitment to the Rome Declaration, adopted at the Global Health Summit in May, as a “compass for collective action”.

The task force will work out by early 2022 modalities to establish a financial facility, to be coordinated by the WHO, to enhance global financing for pandemic PPR.

The creation of the task force was proposed by G20 health and finance ministers on the eve of the summit.

The leaders also noted that strengthening pandemic PPR may involve an international instrument or agreement in the context of the World Health Organization.

Ahead of the summit, President Michel had stressed the benefits of an international treaty on pandemics.

The principle of an international treaty on pandemics rooted in the World Health Organization’s constitution will be the subject of a special World Health Assembly in November. We believe that such a treaty will be the best instrument to improve global pandemic preparedness and response. Charles Michel, President of the European Council

The G20 leaders pledged to work collectively to achieve a successful UN climate conference (COP26), which started in Glasgow, UK, back-to-back with the G20 summit.

They reaffirmed their commitment to the full and effective implementation of the United Nations climate convention (UNFCCC) and the Paris Agreement.

The G20 leaders noted that keeping the goal of limiting global warming to 1.5 degrees compared to pre-industrial levels within reach will require meaningful and effective actions and commitment by all countries, taking into account different approaches.

The G20 will accelerate their actions across mitigation, adaptation and finance, acknowledging the key relevance of achieving global net zero greenhouse gas emissions or carbon neutrality by or around mid-century.

The leaders also committed to taking further action this decade and to formulate, implement, update and enhance, where necessary, their 2030 nationally determined contributions (NDCs).

The leaders recalled and reaffirmed the climate finance commitment made by developed countries to mobilise jointly $100 billion per year by 2020 and through 2025 to support developing countries in reducing their greenhouse gas emissions and mitigating and adapting to the adverse impacts of climate change.

They also welcomed the new commitments made by some G20 members to each increase and improve their overall international public climate finance contributions through to 2025; they look forward to new commitments from others.

The leaders reaffirmed their 2009 commitment to phase out and rationalise, over the medium term, inefficient fossil fuel subsidies that encourage wasteful consumption.

They committed to stopping international public finance for new unabated coal power generation abroad by the end of 2021.

The G20 leaders stressed their commitment to maintaining energy security while addressing climate change, and guaranteeing energy system transitions that keep energy affordable for the most vulnerable households and businesses.

They also emphasised the importance of maintaining undisrupted flows of energy from various sources, suppliers and routes, and promoting open, competitive and free international energy markets.

The G20 leaders committed to strengthening actions to halt and reverse biodiversity loss by 2030.

They will strive to ensure that at least 30 % of global land and at least 30 % of the global ocean and seas are conserved or protected by 2030, and will help to make progress towards this objective in accordance with national circumstances.

The leaders urged other countries to join forces with the G20 to reach the aspirational goal of planting 1 trillion trees by 2030, with the involvement of the private sector and civil society.

The G20 leaders expressed their deep concern about the impact of the COVID-19 crisis especially in developing countries. They reaffirmed their commitment to a global response to accelerate progress towards the Sustainable Development Goals and to support a sustainable, inclusive and resilient recovery across the world.

The leaders pledged to strengthen their actions to implement the G20 Action Plan on the 2030 Agenda and the G20 Support to COVID-19 Response and Recovery in developing countries. They also reaffirmed their continued support for African countries through a range of initiatives such as the G20 Compact with Africa.

The leaders welcomed the new general allocation of Special Drawing Rights (SDR), which has made available the equivalent of $650 billion in additional reserves globally. The G20 will be working on options for magnifying its impact through the voluntary channelling of part of the allocated SDRs to help vulnerable countries.

The G20 leaders called on the International Monetary Fund to establish a new Resilience and Sustainability Trust (RST) to provide affordable long-term financing for low-income countries, including in the African continent, small island developing states, and vulnerable middle-income countries.

The leaders welcomed the progress achieved under G20 Debt Service Suspension Initiative (DSSI), which is estimated to enable the deferral of at least $12.7 billion of total debt service between May 2020 and December 2021, benefitting 50 countries.

The summit discussions were organised into three main working sessions and two leaders’ side events.

In the margins of the summit, President Michel held a number of bilateral meetings with other world leaders:

President Michel and President von der Leyen also participated in an informal meeting of EU and African Union leaders present at the summit, which was hosted by French President Emmanuel Macron.

About the Italian G20 presidency

The Italian presidency’s overarching theme this year has encompassed the three pillars “people, planet, prosperity”. This theme is reflected in the three working sessions at the Rome summit.

Spain is a permanent guest. The Italian G20 presidency invited seven additional leaders as guests to the summit, including the prime minister of the Netherlands.

The previous G20 summit, in 2020, was held via video conference owing to the COVID-19 pandemic.

Copyright All Rights Reserved | Design and Developed by a2zthemes